Any business should be able to advertise and market its products and services wherever and whenever it likes, right? That’s the belief most people will probably have. After all we live in a capitalist society which is underpinned by advertising and marketing. If a company has got the wherewithal to advertise, then it should be able to do so. It might surprise you, however, to discover that our perceived ‘laissez faire’ attitude to advertising, in other words the belief that anything goes, might actually be incorrect. Advertising isn’t the free and easy place we maybe thought it was; particularly if you ply your trade in the debt management industry. You might wonder why that’s important: well read on and you’ll see. 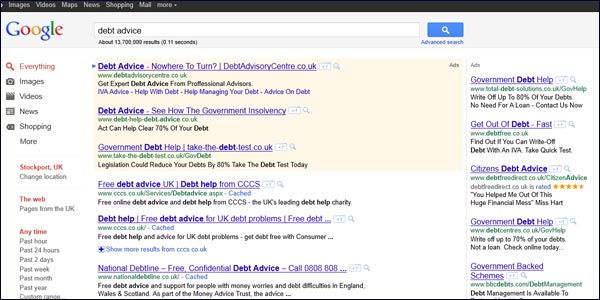 A press release by Business Wire, a Berkshire Hathaway Company, has brought to light a very interesting story that would normally have passed most people by. The Office for Fair Trading issued guidance on the 14 June this year about the standards of advertising in the debt management industry. The guidance stated that the OFT thought that the likes of Google and Twitter were ‘inappropriate’ platforms for these companies to advertise in. Furthermore the guidelines also proposed to impose restrictions on the use of PPC advertising and the use of social networks for that industry. The debt management industry was given until September 6 to respond.

The OFT document admittedly is only draft guidance at the moment, and only extends to those licensees actively practising debt counselling and debt adjustment. However, its suggestions aren’t just limited to PPC and the social media. The guidance also extends to cover involvement in all forums and blogs, and the use of contextual advertising, in other words, targeted advertisements, based on the content of websites on which the adverts appear. The document states:

“The OFT considers that search engine-sponsored links and online messaging forums which limit the number of characters( ie Twitter) are unlikely to be an appropriate means of providing consumers with sufficiently balanced and adequate information.”

There has been understandable criticism of these draft guidelines. Many businesses believe they effectively prevent organisations from using advertising platforms, and therefore place unnecessary restraints on commercial freedom. What is probably far more worrying is the fact that these guidelines could soon also be applied to the credit industry, which is currently being reviewed by the government. ‘Credit’ is the fifth most expensive term to bid for on Google, at $47.12 per click. Text ads appearing in the Google search results were responsible for 97 percent of the Google’s revenue over the past year.

Andrew Smith, director of marketing and external affairs for ClearDebt and spokesperson for The Debt Resolution Forum (DRF), commented:

“The DRF believes that, as long as a licensee’s search engine marketing is legal, that intellectual property and defamation laws are enough to ensure its proper use and any further restrictions would be a restraint of trade.”

“It seems to DRF that as long as profiles within social applications and content of linked pages are compliant, that there should be no reason to restrict licensee’s use of these media. Enforcing this restriction would leave commercial licensees without a legitimate right of rebuttal or being able to defend company reputation.”

“The DRF also believes that to impose the requirement that any content on social networks should be identified, as a promotional statement would be inaccurate, unfair and a restraint of reasonable commercial freedoms and business practices. It is understood that statements made by a licensee should be compliant wherever they appear, but content on Facebook/Twitter and other social networking is not necessarily only marketing communication. It can also be conversational, informational or campaigning. We agree paid-for content should be distinguished as such and, on the internet, should link to pages that are fully compliant. However, we believe a clear distinction needs to be drawn between paid-for social media and ordinary day-to-day use of social media by licensees.”

We’ll now have to wait and see how the OFT responds to these statements. However, if these restrictions are made binding, then it does beg the question what will be next. Maybe all financial services, and then, who knows?