Don’t say you didn’t see this one coming.

It is Valentine’s Day after all and attention turns to matters of the heart and romance. If today is the day when you finally pop the question, then help may be at hand from what is, on the face of it, quite an unlikely source. I bet you never thought your knight on a white charger would be a search engine. Forget the traditional wedding planner from now on, do it online. Google wants to plan the wedding for you. 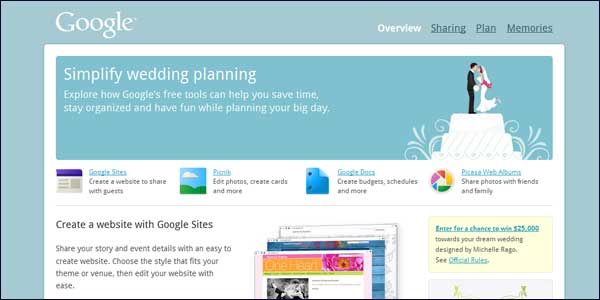 Google made the official announcement of its intention in its blog last week. The site google.com/weddings aims to take the hassle of planning that special day by providing wedding-specific templates in Google Sites, Google Docs and Picnik. Google has teamed up with well-known wedding planner, Michelle Rago, to give pre-nuptial couples expert advice and guidance ahead of the big day. To add that extra sparkle, Google is also hosting a special wedding sweepstake giving one lucky couple the chance to win $25,000 and has the wedding planned by Rago.

It shouldn’t come as too much of a surprise that Google has decided to tread this path. Microsoft set this ball rolling in December, 2010 with its own site, ‘Marry Me Microsoft.’ Business is business after all, and all companies respond to competition by offering what they believe to be a superior service. However, not everyone will rejoice at the entry of Google into this market, as they may well see this as further evidence of the company’s latest attempt to insinuate itself into the everyday lifestyle of consumers.

The launch of Google Health in 2008 was greeted with enthusiasm by many.

The site was launched with the intention of giving users the opportunity to view, organise, track and monitor health information. What could possibly be wrong with that? In theory nothing, except Google then launched an additional service in 2009 when it partnered with CVS to provide online information for users of their prescription drug history. Understandably critics began to express concern about they considered to be evidence of Google’s invasion of privacy, asking the question whether it was ever acceptable for any company to have unfettered access to such personal and private information.

The success of this latest service will ultimately be judged on its results: if it can deliver everything it promises, then many will welcome the service with open arms. Others understandably take a more cynical view and see this as yet another step down a long slippery slope where the price to be paid for increased knowledge and information is a lack of privacy.