After rejecting Google’s $6 billion acquisition offer, Groupon surely must have expected competition for its slice of the daily deals market.

It can’t have come as any great surprise then to find that Google looks set to join the scramble for the local market, as it prepares to launch its own product, Google Offers. As yet the product is only in the testing phase, but if and when it eventually launches, it looks set to have a major impact in the local business sector. 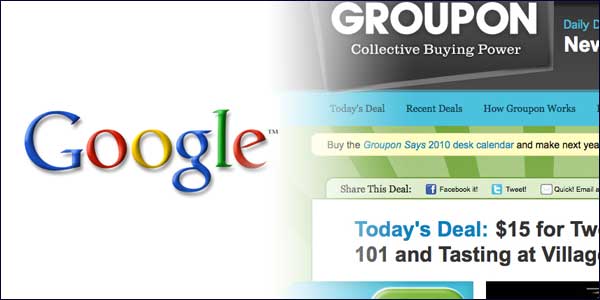 It’s believed the service will operate in a similar way to those offered by both Groupon and Living Social. Users who subscribe to the service will receive an email with the day’s local deal. These deals are time-limited and, like Groupon’s, will only be triggered if sufficient numbers sign up.

The failed acquisition bid signified just how highly Google rated Groupon as a business and was also a testament to its desire to bolster the local advertising market.  Google starts from a strong position, given its vast resources, huge influence and respected brand recognition.  It already has its own major advertising network through both Adwords and AdSense, on which it can build its local platform.  There’s no question that Google Offers will undoubtedly become a major player in the market.

Groupon have proved to be resilient though, and has already risen to the challenge posed by Living Social since it entered the local deals market.

The group-buying giant has already diversified and launched Groupon Stores, a self-serve deal platform that allows businesses to create their own stores, along with Deal Feed, a solution package that aims to combat deal saturation. Groupon are no doubt aware that there are still massive untapped resources in this sector: millions upon millions of local businesses have not, as yet, signed up to the daily deals market. Regardless of the launch of Google Offers, Groupon seems more than capable of retaining its share of this lucrative market.