You know those seriously annoying pop-ups that appear the moment you arrive on a website? As in those that completely and utterly cover every important piece of information and do nothing but slow you down? Well, the folks over at Google have a term for these annoyances, which is “intrusive interstitials”. And as you probably know, they are even more annoying when they pop up on mobile pages – oftentimes leading to you accidentally hitting the link instead of the tiny ‘X’ in the corner to close the bugger.

Well here’s the good news…although it should have been pretty easy to figure out, given the name Google applied to them. As of the beginning of next year, websites found to be using intrusive interstitials on their mobile assets will be subject to heavy penalties and pay the price in their subsequent SERP rankings.

Specifically, Google has announced that this new penalty system will go live as of January 10, 2017, given the way in which these incredibly annoying annoyances “can be problematic on mobile devices where screens are often smaller.” Which is something anyone using a smartphone with a screen size of less than 5 inches can certainly understand…they really are infuriating.

As for exactly what will happen to those who continue to contravene the rules of Google, they’ve basically warned that “pages where content is not easily accessible to a user on the transition from the mobile search results may not rank as highly.”

However, there’s already been some confusion as to exactly what the powers that be consider to be intrusive interstitials, as opposed to those that are of quality and value. In order to clarify the matter, Google stated in no uncertain terms that those falling under the bracket of intrusive interstitials include:

And just to make things that little bit easier to understand, here’s a simplified image from Google to illustrate exactly what they are talking about: 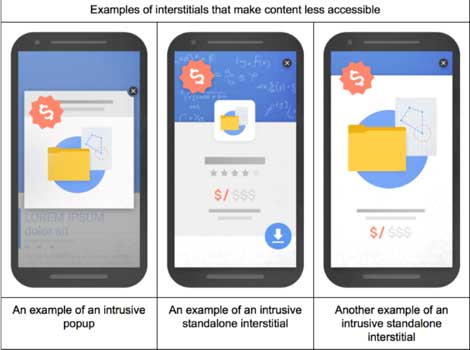 What will continue to be considered acceptable? Good question – and one that has already been asked by thousands. So once again, Google offered an explanation and diagram to clarify things.

Interstitials that will not be subject to penalties include:

And here’s the illustration to clarify the matter further: 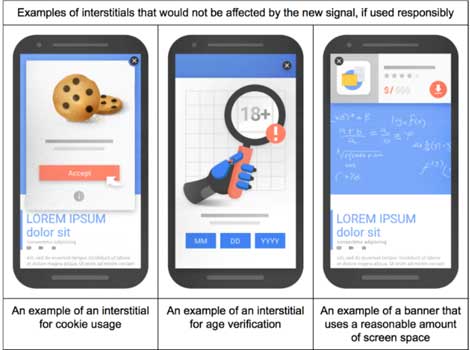 So the long and short of it is that you basically have somewhere in the region of four months to ensure you comply with the new rules. It technically shouldn’t be a huge change to make, but is one that could see you falling down the rankings if you don’t make it in the allotted time.