They say you can’t keep a good story out of the news. Well, it’s true, you can’t. But they should also add that sometimes you can’t keep a big company out of the news either, even the one’s who generally report the news rather than make it. We’re not talking about News Corp here or the goings-on in the Murdoch Empire: this story is all about Google, or more specifically Google+. It’s only been around 3 weeks and it’s all over the news again. Not content with already banning Jesus and God, Google+ decided to ban Star Trek actor, William Shatner, for having the temerity to say hello. Fortunately Captain Kirk got a reprieve: sadly The Creator and his only ‘son’ didn’t. So, what’s going on with this new social networking upstart? 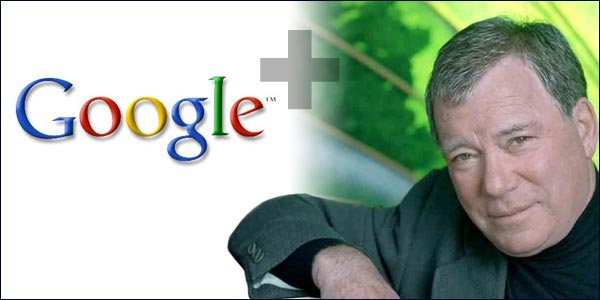 Getting admittance into the chosen ‘circle’ is tricky enough. Google+’s new social network currently runs on Beta, and admittance is by invitation only. You can of course buy an invite on eBay if you’ve got deep enough pockets, but of course that rules most of us out. Anyway, tech-savvy Shatner, who’s no stranger to social media platforms like Twitter, was immediately let into the circle: who wouldn’t let Captain Kirk in after all? Unfortunately he made the ‘fatal’ mistake of saying hello, and apparently this just isn’t the done thing. His account was immediately banned, much to his confusion: he tweeted to this effect wondering what on earth he’d done wrong.

“My Google+ account was flagged for violating standards. Saying hello to everyone is apparently against the rules. Maybe I should say goodbye?”

Well, he didn’t get chance to, as Google made the decision for him. But they say you can’t keep a good man down, and Captain Kirk certainly has the reputation of being a good man. His account was re-instated soon after and now he’s back in the fold. So, what was the problem?  Nobody knows for sure: some say it was a mistake, some that the account was suspicious, and others that it was simply a PR stunt to generate publicity for the new platform. Whatever the reason may have been, Google certainly got the publicity – intentional or not. His wasn’t the only account to have ‘violated community standards’ either: others have subsequently come forward to make similar complaints about being banned for the most innocuous reasons. Google, in the meantime, have remained tight-lipped about the fiasco: maybe the line of thought is simply the least said, the soonest mended.

Is there a moral to be had somewhere – some sobering and enlightening insight? Not really other than Google is no longer just the purveyor of news and information, it is the news, and maybe that’s precisely the point.