A man’s best friend has historically always been his dog.

Granted, Lassie may never have been the most talkative, but if you were looking for loyalty and companionship, then the good old canine was peerless. Toyota Motor Corp, however, are keen to change history. The Japanese car giant has teamed up with cloud computing company, Salesforce.com, to build a new social networking service that will let car owners become ‘friends’ with their vehicles and receive friendly tweet-like reminders for maintenance checks and other notifications. You’d be forgiven for thinking this was all a little far-fetched, and more like a fictional script from Knight Rider, but it is fact, and will hit these shores in the not-to-distant future. Kitt may have been David Hasselhoff’s best friend once upon a time, but now, you too will be able to talk to your own car, should the mood ever take you. 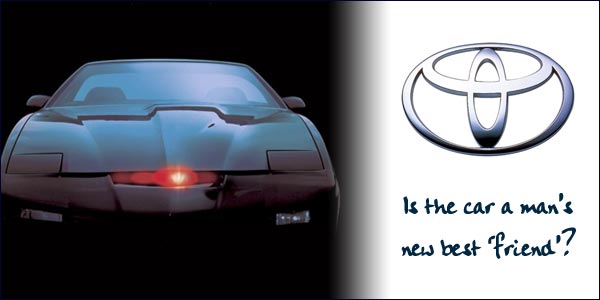 The latest deal is the second tie-up between the world’s largest motor manufacturer and the software company in as many months: Toyota and the Microsoft Corporation announced plans last month to bring internet-connected services to all Toyota cars across the world. In a joint news conference in Tokyo last week, Toyota President, Akio Toyoda, flanked by his Salesforce.com counterpart, CEO Mark Benioff, explained to the assembled press why this move was both necessary and revolutionary: “social networking services are transforming human interaction and modes of communication. The automobile really needs to evolve in step with that transformation.”

So how will it work, and what benefits will it bring?

Information technology and telematics will become increasingly important, not just in the everyday lives of consumers who want the latest information instantly, but in the automobile industry. This technological breakthrough will add value to the car as it will allow connectivity between the vehicle and the laptop or mobile phone: what’s more, it will also be used as a marketing tool where drivers will be able to communicate with dealers and the company directly. The new social network they are looking to create will be called ‘Toyota Friend’ and will function in pretty much the same way as Facebook or Twitter as owners will be able to chat with their vehicles.

The car will have its own profile, much like you or I, and will send messages to either the driver’s phone or computer reminding him that the next service is due, or telling him that the electric battery will need to be recharged shortly. The driver, for his part will be able to respond. How this two-way interaction will work is a little less clear, but Toyota envisages no problem with it. The new service is an extension of Toyota’s existing network, and will allow customers across the world access to its digital services like GPS and multimedia via Microsoft’s Azure cloud computing platform.

The service will only initially be offered in Japan in conjunction with Toyota’s first electric vehicles and plug-in hybrid cars due next year, but is expected to be rolled out worldwide as soon as is practical.

So, if in the future you see the driver of the ‘car in front’ seemingly talking to himself, he hasn’t necessarily lost the plot, he’s probably just having a chat with his new best mate.