There was a time when Myspace was the go-to destination not only for the younger generation, but also anyone with aspirations to be young and trendy.

It was one of the original social networks, and can rightly claim credit for launching the careers of a group of young artists, like the Arctic Monkeys and Lilly Allen who have subsequently gone on to achieve universal commercial success. However, Myspace is not the force it once was: even the commercial might of Rupert Murdoch’s News Corporation hasn’t been able to reverse its lagging fortunes. Its popularity continues to plummet with alarming speed. 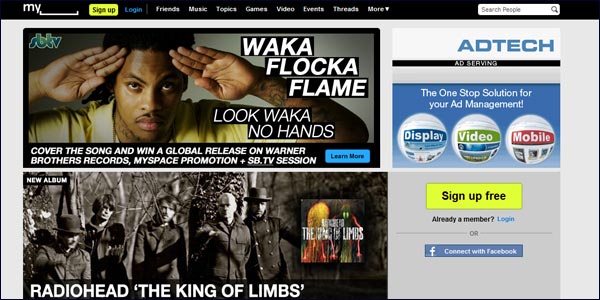 The figures are bleak which ever way you look at them. According to tech industry analysts, comScore, Myspace lost a further 10 million unique users in the space of little more than a month, reducing from 73 million users down to 63 by the end of February 2011. That loss, which is significant in itself, is unfortunately just the tip of the iceberg:  the platform has lost over 50 million users in total in the year from February 2010. Myspace has announced the loss of a further 500 jobs as a consequence.

Myspace had tried to halt the slide, by realigning its strategy to focus purely on its core music roots. Myspace boss, Mike Jones, told the Telegraph newspaper back in 2010 that the company would no longer try to compete with the likes of Facebook and would concentrate purely on being a “social entertainment destination.” It then launched a series of initiatives like Myspace Music to tempt its followers back, but they had little effect and the numbers continued to decline.

If you were to turn the clock back 5 years, Myspace was booming.

It was without question the first choice destination for all those who wanted to talk to their friends and listen to music. But the face of social networking has changed markedly over this period: rival platforms like Facebook and YouTube have blossomed and secured the bulk of the advertising revenue and the lion’s share of the market. News Corporation paid a reputed £330 million for the company back in 2005, now it’s optimistically estimated to be worth around 50 million at best.

Will Myspace be able to come back from this, and pull an unexpected rabbit out of the hat? If you believe the experts in the industry and some of their gloomier predictions, then the answer is it looks very unlikely.