Money can’t but success apparently, not even for supermarket giant Waitrose.

Despite spending a reputed £10 million on the launch of its new website in March this year, the supermarket has been beset by bad publicity from its disgruntled shoppers. Many claim the site is anything but user-friendly or intuitive. Anyone lucky enough to get onto the website is finding that they have to repeatedly re-enter their details before making a purchase. As if that isn’t bad enough, research recently carried out by the Grocer would suggest that it’s also virtually invisible to new customers on the search engines. The reason for this is that the site is poorly optimised for search engines like Google. In fact, its SEO is so poor that even Morrisons ranks higher, and that company doesn’t even operate an e-commerce site. So, what’s going on?

How can such an established company spend so much money online and get its SEO strategy so wrong? 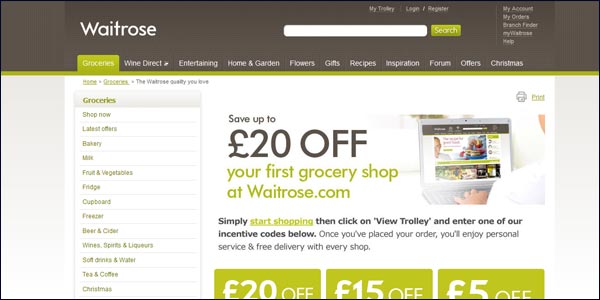 Well, according to Juliette van Rooyen, a consultant from digital consultancy Reform, who has carried out an analysis of SEO measures determining the visibility of Waitrose, Ocado and the big four supermarket’s websites to search engines like Google, the whole strategy is a disaster:

“Waitrose.com is so technically hampered it is going to have a problem ranking for anything – it’s terrible.”

None of the major supermarkets came out covered in glory. They were all losing out because they were failing to optimise their web pages for popular search terms, according to Simon Hall, retail manager at Google UK. He also added that describing content with more relevant terms – such as recipes – would help them win more business online: “the supermarkets all need to improve – they’re just not getting the exposure they should.”

Analysis for the Grocer by Experian Hitwise revealed that no supermarket ranked in the top 10 for the five most popular recipe searches: chocolate cake, cup cakes, Yorkshire pudding, pancakes and sloe gin.

“The supermarkets seem so fixated on their own agendas that they don’t seem to realise people like Amazon are stealing market share in categories such as recipe books and dried goods,” added van Rooyen. The particular criticism of search engine optimisation for Waitrose.com comes amid continuing anger from Waitrose’s customers following the site’s March relaunch.

Waitrose have been stung by the criticism of industry experts, and are trying to put matters right, but that criticism pales into insignificance compared to that it’s receiving from its previously loyal customers:

“It’s a very expensive disaster,” one customer wrote in a letter to The Grocer, citing Waitrose’s failure to address problems such as the need for users to repeatedly re-enter details before making a purchase. “It’s time Mark Price steps in and sorts out this very expensive mess,” continued the customer. “Stop trying to reinvent the wheel. It isn’t working.”

Robin Phillips, e-commerce director at Waitrose, last week used the retailer’s online forum to tell customers: “it’s now quicker and easier to register to use Waitrose.com. Shoppers can now view branch locations on Google Maps, collect party orders from branches other than those where they had placed orders, and order Christmas items online.”

However, further improvements to the site’s ‘remember me’ and search functions have not yet been made.

Waitrose has yet to announce exactly when it intends to address these problems, adding only that it will look at them in the coming months. In the meantime they will only continue to lose ground on their competitors. All of which only goes to show that it’s not what you spend that matters, but how you spend it. You can invest in an all-singing, all-dancing website, but if you neglect to optimise it for the search engines, no-one will ever find it. Surely that’s a salutary lesson for everyone, even those of us with shallower pockets.

2021 is the year that the shift in your business goals really needs to match up with the momentum gained from radical changes you may have had to implement, which…

How to Make Google Your Number One Salesperson

When running a business you are faced with many frustrations where things don’t go to plan. The number one issue with internet marketing efforts is discovering how to rank higher…