The event was billed as the conference where the great minds and innovators of digital and social media marketing could exchange views and opinions, and learn from some of the sectors largest players about how best to make the digital world work for business. One highlight that was highly anticipated was the keynote presentation from Rick Wion, head of digital marketing at the global fast food giants McDonald’s.

Why was there such anticipation? 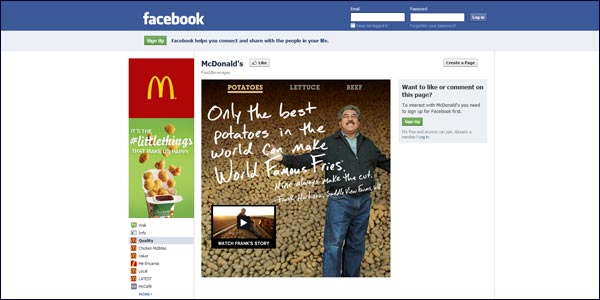 It’s often said that there’s no such thing as bad publicity as far as business is concerned: as long as the company name gets a mention, then all be right in the end. By and large that opinion is probably about right, but sometimes we’re afraid, bad publicity is simply bad publicity, and the sooner it’s forgotten, the better. McDonald’s invested in paid hashtags on Twitter, including a #McDStories hashtag. It was intended as an avenue where brand fans and followers could share their love of the product and the company behind it. It probably seemed like a good idea at the time, maybe even a banker, but boy did it backfire. The hashtag was quickly besieged by brand haters who regaled everyone with lurid tales of woe and dissatisfaction. All in all it was a PR disaster, so it was hardly surprising that the audience was keen to hear what the man behind the campaign had to say.

Did the head of digital marketing hold his hand up and accept that it was a disaster from start to finish?

Well, yes, eventually, but he preferred to concentrate naturally enough on everything that he company was doing right. One PR triumph was the result of a complaint on the hashtag about an unhappy experience for the son of a mother who took him to her local restaurant. The toy did not meet his expectations, so she duly complained publicly. McDonald’s responded with a handwritten note, an apology and a new toy. The result, according to Wion, is that this disgruntled woman turned from a critic to a brand ambassador and shared her experience across the network. As Wion, pointed out, if you get criticism, then you need the structures in place to handle the criticism straight away and nip the problem in the bud. There were also anecdotes relating to the fact that McDonald’s burgers were made of 100 percent beef, not 15 percent as claimed.  He also made reference to interactions with both P Diddy and Charlie Sheen that McDonald’s believed had increased the positive image of the company on social networking sites. It was all very interesting stuff, but it still skirted around the issue everyone wanted to hear about.

When Wion did eventually brooch the PR disaster, he put a positive spin on it as you would expect. He maintained that the hashtag had not been disastrous, and that in fact the proportion of complaints only amounted to two percent of the total tweets. He argued that the majority of comments were in fact favourable and complementary, and unfortunately the media frenzy had only been fuelled by poor journalism and a desire to pander to those who made a habit out of complaining: although he didn’t quite go so far as to say it, what he actually inferred was that it’s always the squeaky wheel that gets the most oil. However, on a more positive note, he did offer some useful advice to his audience about social media marketing. And what advice was that?

Well, it amounted to the traditional Boy Scout motto of always being prepared.

People, he argued, will always gravitate to the worst news and take pleasure in spreading this news as far and as wide as possible. So businesses have to have a thick skin and try not to take the criticism to heart, but also make sure they have all the resources, responses and documentation available to be able to rebut adverse publicity as soon as it was raised. Social media marketing can be fantastic for businesses. If they time it correctly, then personal and heartfelt stories can really build the strength and robustness of the brand. It’s a marketers dream to get their followers doing their work for them; they spread the word on the business’ behalf. The only problem with such an approach is its unpredictability. No-one can second guess which campaigns are likely to backfire. Even the most carefully planned media campaign can come unstuck due to circumstances that could never have been envisaged when the campaign was on the drawing board. Wion’s solution was to keep a sense of humour and perspective, and move on.

If there’s a lesson to be learned, it’s that if you want to get the public to do the work for you, then social media marketing is ideal. Yet, you have to remember that for reasons you might never imagine, it can all suddenly go pear-shaped. As long as you’re prepared for this eventuality, then though the fires of bad PR may rage for a while, you’ll soon be able to put them out and move on.