It was meant to be a tongue-in-cheek advert, a bit of harmless fun that would raise the company profile and make people giggle, but it very nearly backfired spectacularly.

Groupon, the world’s most successful daily-deals business, broke with social media mores and traditions and paid for an advert screened during the Super Bowl. Many who watched the advert failed to see why it was necessary to poke fun at the plight of the people of Tibet: others recognised the humour, but saw it as nothing other than a tasteless piece of exploitation. The world complained, Groupon’s market share fell, the company apologised and the furore subsided. Several months on you’d be forgiven for even remembering it happened. But ask yourself this question, does publicity like this really do a company any long-term damage, or are there certain boundaries that should never be crossed? Whilst you’re at it, ask yourself this one as well: what harms business reputations most – the odd peccadillo, or a broken promise? 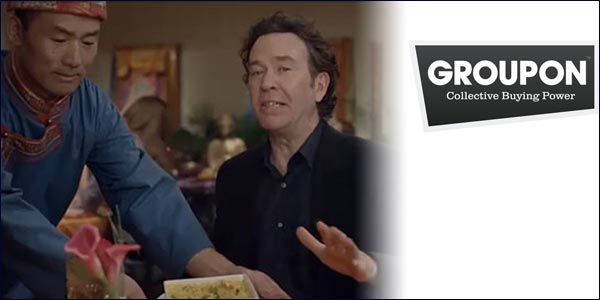 If Tibet gate passed you by, then you must lead a very sheltered life. It made headlines worldwide for perfectly understandable reasons. So, if you were AWOL at the time, here’s a brief synopsis of what happened. Groupon commissioned a mock- documentary advert for screening during the big game. It began seriously enough as actor Timothy Hutton told of the daily plight of the Tibetan people and how they were struggling to overcome repression. All would have been good had the advert not then segued into an advertisement for cut-price Tibetan fish curries courtesy of Groupon. Was that tasteless, or ironic? Well, that depends on your point of view. Many people believed the former and voted with their feet. Groupon’s popularity hit the wall and its market share plummeted. According to figures released by Brand Research Company, You Gov, Groupon’s ‘brand buzz’, or popularity, fell by 9.1 points from 14.1 to 5.3.

Yet this ‘hit’ didn’t prove to be fatal. A few reassuring words from Groupon CEO, Andrew Mason, and a promise to donate a considerable chunk of cash to the cause it inadvertently trivialised, and all was right with the world. In fact, it wasn’t just alright, it proved to be much more than that. Not only did Groupon recover the lost market share, but its brand buzz actually increased to over 26.6 on a scale of 0 -100. Is there a moral to all of this? In a way I suppose there is, and it’s simply that if a business drops a clanger and tastelessly offends its customers, then it is still possible to rebuild a tarnished reputation as long as you appear contrite enough and promise to right the wrong. Moreover, it adds credence to the old adage that there’s no such thing as bad publicity: sometimes a controversial comment can actually help to boost business reputations.

So, having learned the lessons from this minor fiasco, you’d have thought that Groupon would have been pretty much bomb proof.

Unfortunately consumer confidence is fickle. Successful internet marketing is founded on reputation: businesses build this reputation by delivering goods and services that fully meet the expectations of their customers. But reputations have to be managed, and this can prove to be very tricky, because once you’ve set the bar at a high level, you have to maintain these standards. The greatest faux pas for any company is the failure to deliver on a promise.

Groupon’s Valentine’s offer of cut-price flowers was little short of a disaster, coming so soon after Tibet-gate. The joint offer with flower distributor, FTD.com, promised a $20 reduction on the standard price of flowers for the special one in your life, delivered on the most romantic day of the year. Unfortunately, customers soon discovered that the discount only reduced the price to $40, even though Groupon has intimated that the standard price was $40 dollars. What made matters even worse was that postage rates were extra, so that they ended up paying much more than they bargained for. As if that wasn’t bad enough, many customers didn’t receive their flowers until after the event and felt Groupon was wholly to blame for landing them in the matrimonial doghouse.

Groupon, of course, will survive; such is the power and omnipotence of the brand.

It’s still the clear market leader in the daily-deals market, and is still comfortably ahead of its nearest rival Living Social. However, the gap is narrowing all the time. Moreover, other players, like Google and Yelp, have now entered the market squeezing the margins even further. Groupon can no longer take its market share for granted.   Is there a lesson to be learned from this disaster? Well yes, never promise what you can’t deliver. A broken promise can seriously damage consumer confidence,  and can often lead to brand migration. Customers have longer memories than elephants: break a fundamental promise and you’ll probably regret it at some stage down the line.